Due to our own curiosity we wanted to find out what would happen if we were to test our Crown hockey stick to the extreme. After speaking to players it was suggested that durability and wear resistant fibre should be put to the test.

The most extreme, and fun, test that we discussed was to shoot a hockey stick with a shotgun to see how wear resistant and durable our fibre was. We also shot a few competitors sticks to see what we were up against.

The white fibre that you see on the Crown stick is our wear resistant fibre (normally we colour our resin with black pigment so that our Crown sticks have a black face, the fibre is naturally white). Our performed better than our competitors in two major ways. 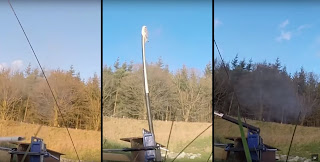 1. Our Crown stick did not break at the handle. We were expecting the damage to be exclusively located on the face of the stick, but the force of the shot gun was so strong that are competitors sticks snapped at the handle. 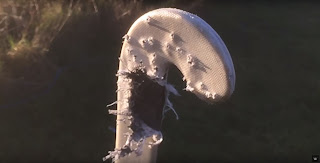 2. The Crown stick's face took less damage. The carbon fibre underneath our unique fibre remained largely undamaged. Compared to the competitors sticks which punctured the fibre leaving the bullet wadding left lodged inside the sticks. In the picture below we removed the wadding to see the full extent of the impact made. 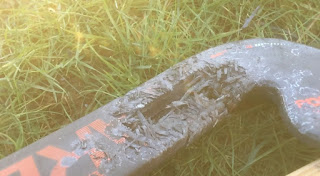 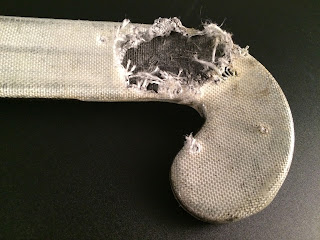 [We tested another Crown stick. This picture was taken after one shot, keeping all conditions consistent]

We attempted to keep the tests as uniform as possible, shooting all sticks at a range 5 metres with a 24g round at a force of 1420 feet per second. Using the same shotgun for every shot.

Overall it was a great way to test (and prove) our sticks strength compared to others, as well as make something exciting and different for people to watch.

Hope you guys enjoyed the video :)